Northome is way back in the sticks, with an average population density of less than 2 people per square mile (the "uninhabited" color of most population maps). One of the attractions during the Great Depression was that if a family was really going hungry, they could shoot a deer to feed themselves, and it wouldn't draw attention. (And our families, like most in the area, were quite poor at that time). Also, with the numerous swamps and lakes, there was always water for the cattle and the gardens, unlike the dust bowl conditions farther west. Most of the area is woods, both private and public, so some money could be made on the side with logging or trapping animals for fur. People hunted, fished, or grew most of their own food, cut their own wood for heating, and sometimes built their own log houses.

The area was first settled by Europeans about 1901, mostly by Scandinavian loggers who felled most of the large white and red pines that were in the area at that time. When the prime logging ran out in the late 1920's, the farmers took over. They were mostly Germans and Norwegians, with a few Swedes as well as those who had been in America for several generations. During the 30's many people came in from the dry Dakotas. Electricity (from the REA, or Rural Electrification Act) finally made its way to the farms around Northome in late 1949. While Fred had a phone in the 1940's, it wasn't until the 1960's that everybody had one, and until the mid 1970's it remained on the communal party-line system (each house had its own ring pattern to know when to pick up, and neighbors could eavesdrop by picking up on someone else's ring). A few old-timers went without indoor plumbing up until the late 1980's. 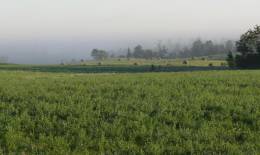 Fred and Walter lived on farms near each other in Bridgie Township, about 5 miles west of the village of Northome itself. Ungerecht descendents still live on both farms today, with numerous cousins and second cousins growing up in the area. The descendants of the two brothers owned well over a 1,000 acres in the 1980's and probably close to that today. While productive, it was never prime farmland (it includes swamps, second-growth forest, etc).