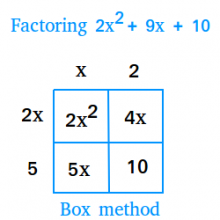 -b/a is the vertex (x value) if graphing, y = remainder

Start with equation of square.

Multiplicity of a polynomial

Multiplicity is the number of times a given factor appears in the factored form of the equation of a polynomial.

Rule of signs & Number of roots

Roots of a polynomial are locations where y=0. Rule of signs can tell us how many roots exist, and how many have a positive or negative value of x.

The highest power is the number of total roots.

What are all the possible rational roots of the following function: 6x⁴−x³−4x²−x−2

Remainder theorem: If a polynomial f(x) is divided by x – k, then the remainder is the value f(k).

Another use for the Remainder Theorem is to test whether a rational number is a zero for a given polynomial, but first we need a pool of rational numbers to test. The Rational Zero Theorem helps us to narrow down the number of possible rational zeros using the ratio of the factors of the constant term and factors of the leading coefficient of the polynomial.

When the leading coefficient is 1, the possible rational zeros are the factors of the constant term.

Back to the Start page or math page.