Our Ungerechts lived in the little village of Helba from the late 1600's until emigrating to the U.S. in 1864.

Matthias found a local historian who described some of the history of Helba, although from what I gathered in the translation is that most of it was after our Ungerechts left.

The church in Helba that our Ungerechts would have attended before they emigrated to the U.S. has been since converted into a school, then into a private residence. The local historians remembered going to school here, sometimes using boards to cross the street which would flood from a nearby creek. 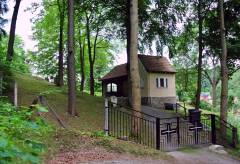 The Helba cemetary dates to 1696, and is located on a wooded hillside overlooking the town. There is a chapel with an enclosed room to store the casket, and a larger room with one side completely open for holding funerals.

The tradition in Germany is to rent a grave for a period of time (such as 20 years), and then re-use the grave. So there are no old tombstones to look at. There was, however, a recent tombstone for the family of Fritz Ungerecht. Matthias was pretty certain all Ungerechts in Helba are descended from Johann Caspar Ungerecht, so Fritz has to be some degree of cousin.

See also my pictures of: Meiningen, Helba (this page), Walldorf, and Eisenach.