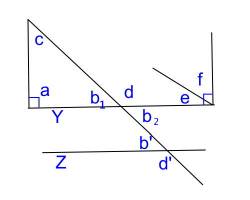 In the diagram shown, <b₁ and <c are complementary, as are <e and <f. Angles <b₁ and <d are supplementary. Because of alternative angles of parallel lines, <b₂ = <b', and <d = <d' (assuming lines Y and Z are parallel). From the vertical angles theorem, <b₁ = <b₂.

Distance between two points = √(Δx² + Δy²) (based on Pythagorean theorem)

Go back to geometry or math page.