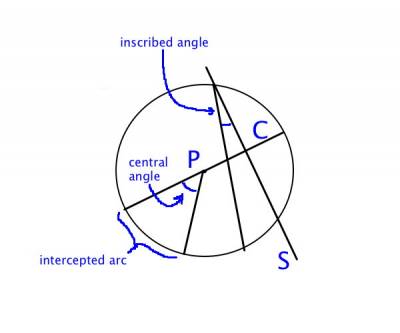 In the image, P is center point of the circle, line C is a chord and line S is a secant.

All inscribed angles going to the two same points on the circle (but from different vertices) have the same angle.

The intersecting secants theorem, for secants or tangents that intersect outside of the circle says the angle formed by the secant intersection = (opposite arc - adjacent arc)/2

coterminal angle - the rest of the circle outside the angle.

area of an arc (from a central angle):

length of arc, given length of chord and radius:

circumcircle - a circle that touches the vertices of an polygon

——- Back to geometry or math page.