In 2016, my family and I made a trip to Helba, Walldorf and the general Werra river valley and took plenty of pictures. Below is a brief look at the towns.

Helba was originally a separate village, but it was annexed in 1923 and is now a neighborhood on the north part of Meiningen, Germany. Meiningen (including Helba) has a little over 20,000 people today. Located basically smack dab in the center of modern Germany, it is in the sparsely populated Thueringen forest. Meiningen also has the palace for the duchy of Saxe-Meiningen, and the restaurant in the palace is operated today by Norbert Ungerecht (relationship to our family is unknown).

Our Ungerechts lived in Helba in the 1700's and 1800's, being mayor at times, but before that they came from Walldorf. (Maternal lines come from other villages in the area, still sorting through all that). Both Helba and Walldorf were located in East Germany during communist times, being only a few miles from the border with West Germany. Here are some of my pictures of Helba and Meiningen. 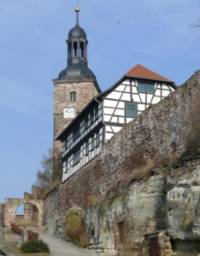 Walldorf is about 5 miles west of Helba, not a big deal today, but probably fairly major back in the time of serfs and guilds. (Do not confuse this with Waldorf, with a single 'l', such as the Waldorf Astoria, a well-known hotel. There is also a Walldorf in Bavaria, that is a larger town of 20,000 people. This is Walldorf / Werra of the Saxe-Meiningen region, with about 2,200 people.) A smaller town of Wallbach is just across the road to the north, this is where the Erbes came from.

Walldorf is a very old village, the earliest records of it start in the year 982. That's about as early as such records were kept, so who knows when it was first established. It is known for its fortified church, or kirchenburg. It is a church on a hill, surrounded by walls. Again, we don't really know how old it is, the protective walls were apparently built in 1008, and the church replaced an earlier chapel. The emblem above the door says 1587, but it was burnt "to the masonry" in 1634, when the Thirty Years War reached that area of Germany. This was a very destructive war, during this time the fighting, famines and epidemics killed an estimated 2/3 of the population of this region of Germany. In addition, there were witch hunts from 1597-1660 where 30 people (mostly women) were burned at the stake. The church was well maintained for centuries, and a refurbishing had just been completed when it again burned to the masonry in 2012. Fortunately for us, the records it contained (since the previous fire of 1634) had been copied and stored at the church headquarters in Eisenach.

Jews came to Walldorf in 1584 (or before), by 1849 roughly a third of the town was Jewish (562 out of 1637 total residents). Anti-semitism was long present however, apparently at the public water supply there were two pipes, one for Christians and one for Jews. The Jewish population declined dramatically before WWII (in 1933 there were 53 Jews out of 4677 total residents), and during the war all remaining Jews were deported and the synagogue destroyed.

Here is the official Walldorf-Werra web site, but it is only in German, and here are pictures of my visit to Walldorf.

Helba/Meiningen and Walldorf are not far from the larger town of Eisenach (pop. 42,000). BMW had a factory there which was taken over by the Soviets, during communist times they made the Wartburg. That was named after a nearby castle, which is now a UNESCO world heritage site. The Wartburg castle is where Martin Luther stayed in 1521 after being excommunicated by the Catholic church. Eisenach is also the the birthplace of Johann Sebastian Bach. Here are a few pictures of Eisenach.