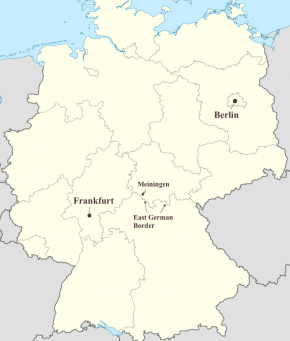 Most of the sites are right around Meiningen, which was just inside the East German border. This is in the Thuringian Forest (Thüringer Wald), the "green heart" of Germany. See description of Helba and Waldorf, and pictures of my trip here in 2016. At the time of emigration (1864) this was considered part of Saxony, as the official unification of Germany did not happen until 1871, and it might even show up in some records as Prussia.