Northome is way back in the sticks, with an average population density of less than 2 people per square mile (the "uninhabited" color of most population maps). One of the attractions during the Great Depression was that there was wild game available to help out with protein. (And our families, like most in the area, were indeed poor at that time). Also, with the numerous swamps and lakes, there was always water for the cattle and the gardens, unlike the dust bowl conditions farther west. Most of the area is woods, both private and public, so some money could be made on the side with logging or trapping animals for fur. People hunted, fished, and grew most of their own food, cut their own wood for heating, and sometimes built their own log houses. 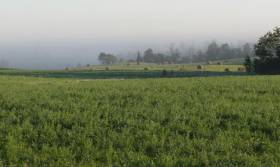