As a child, Bertha (also called Rebecca or maybe even Barbara, but Bertha was George's preferred name for her) emigrated to the U.S. and as a teenager worked as a maid at the Medora Rough-Riders Inn (this was during the time that Teddy Roosevelt had his ranch nearby in the North Dakota Badlands, in what would become the Theodore Roosevelt National Park). 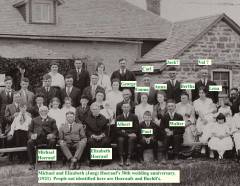 They moved to Wales Wisconsin. The family farm in Wales was then sold to create a state-run tuberculosis sanatorium, which eventually closed down and became a juvenile detention facility. After selling the farm in Wales, they moved back to Glen Ullin. One record has the oldest kids being born in Hebron (where her side of the family lived) while they proved up on a homestead, then Emma was the first child born in Wales, WI, all the rest born there except for Paul, who was born in Caledonia.1) Then they rented a farm briefly in Hebron before owning the ranch south of Glen Ullin that remained in Ungerecht hands for many years. Bertha was apparently somewhat separated from her family after the marriage, although the Ungerecht family did attend Michael and Elizabeth Hoerauf's large 50th wedding anniversary.

All of the kids were skilled at riding horses, and several continued to work with horses - Fred used his team of horses in logging camps around Northome, George was good at breaking horses, Walter worked as a cowboy in North Dakota and Oregon.

The picture at the top of the page (when online, or the cover page for the PDF or printed version) is of Bertha and George, and presumably the two oldest kids. (The custom at the time was that kids of both sexes wore dresses and boys didn't get their hair cut until about age three).